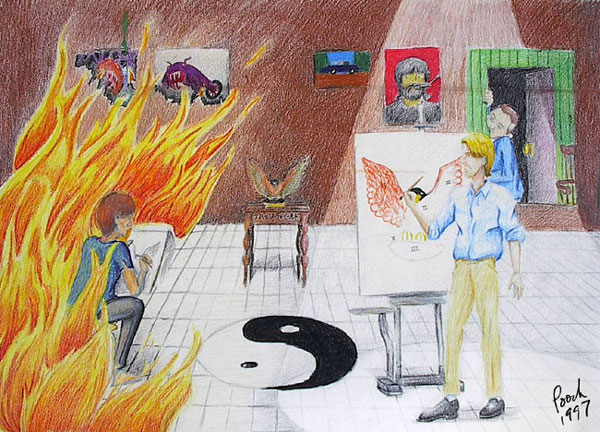 Back in high school, I didn't paint. I did, however, draw in pencil, charcoal and colored pencil. But usually, it seemed like every schmuck who dragged a brush across a canvas was revered as the second coming of Michaelangelo, and everyone else was dog crap. So, one morning while in the shower, this image came to me -- an allegory of the treatment of those who painted versus those who didn't. I quickly dashed off a rough sketch in my notebook (which I still have), and started on the actual piece almost immediately. Of course, whether it was because the image was bad or because it was a muddy allegory, nobody seemed to get that the guy on the left is being engulfed in hellish flames for choosing to draw instead of paint -- almost everyone who saw the picture asked me "Does that guy know the room's on fire?"