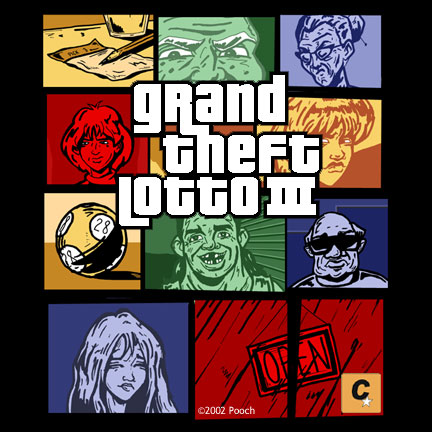 Drawn with pencil, inked with pen, colored, lettered, and assembled in Photoshop

From my earliest days I was always fascinated with parody -- I used to read Mad Magazine, I listened to "Weird Al" Yankovic, and I loved it all. So it's probably not a surprise that I usually find myself coming back to parody in one way or another. One of my first major projects as a lad was creating a bad parody of the Beatles. In high school, some friends and I came up with "Perigee Software" a take-off on Apogee Software, which would have included parodies of all of Apogee's games (and then some).

Which brings me to this. I was a big fan of Grand Theft Auto III when it came out, and one day the phrase "Grand Theft Lotto" popped into my mind, so I went about making a parody game cover for said game. It was fun to draw in the style of the GTA pictures, what with their heavy use of inks and slightly "off" character compositions. In the end it was a lot of fun to do, at least -- I don't know how well it works as a parody.