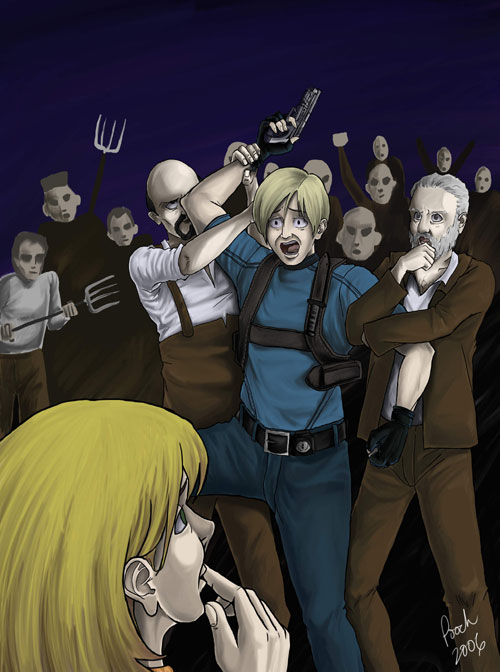 Drawn with pencil, inked and colored in Painter

Oh boy, did this thing ever kick my butt. Though this was sketched out a week before the Jill Valentine piece was sketched out, it wasn't finished until a good two weeks after I finished the Jill drawing. For some reason, I just couldn't muster up the interest to do this thing. While the Jill Valentine drawing went from sketch to finished work in a matter of about two days, ol' Leon here took me a week to even ink completely, because I kept wandering off and doing other things.

Ironically, though, once I started coloring I couldn't stop. Though at first I was going to do this with cel-shading, that idea was quickly dropped (though you may still see the remnants of the cel-shading I did on Ashley's face) and I reverted to my somewhat usual smudgy CG paint look.

I think this is the largest amount of male figures I've drawing in quite some time, too. Quite a change from my usual litany of poorly drawn and colored anime girls. And this piece is notable for the simple fact that, not only is there more than one figure, but there's multiple figures interacting with each other! WOW.

And just in case you were wondering: yes, the background zombies are supposed to be very simplistic and not very defined in their look. It wasn't just me being lazy (though I suppose that probably had something to do with it, too).