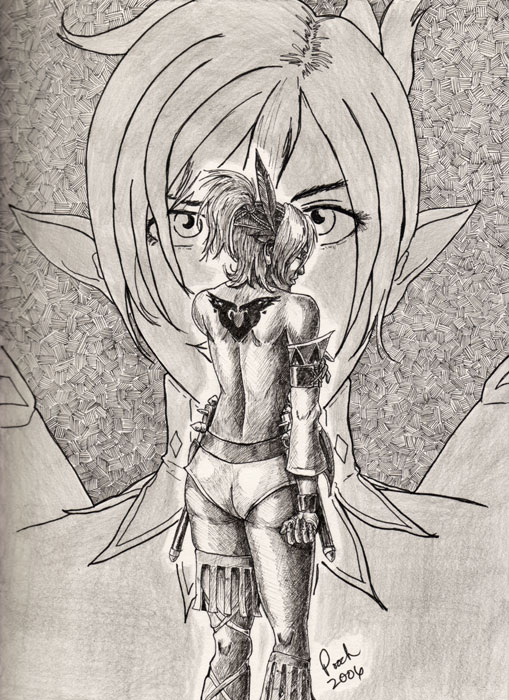 Yet another video game fanart, this time from Shadow Hearts: From the New World. The Shadow Hearts series of games are notoriously anachronistic, and From the New world does not disappoint. The game takes place in 1929, and the main character is a) a 16 year-old private detective who b) looks like Tidus' younger brother and who c) dresses like Chachi from Happy Days (a character who's anachronistic in his own way, which we're not going into here).

This character, however, is not that character. This is the main heroine of the game, a tragically under-dressed Native American who can change forms and become all sorts of monsters. You gotta love the fact that, whenever this character changes into a monster, the game gives you a lovingly crafted cutscene where the character sheds her clothing to become said monster. The character in the background is one of the monsters she turns into.

This drawing was rare for me in the fact that it went from sketch to completed in less than a day -- though the lack of color certainly contributed to that. Also, forgive the crappy scan. I did this in my sketchbook, which is slightly larger than my scanner glass, and I didn't feel like stitching an image together.