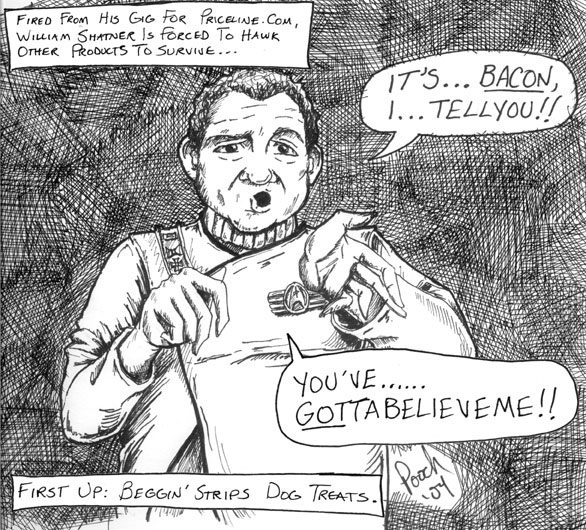 Drawn with pencil, inked with pen, tweaked with Photoshop

A goofy comic, based off of a parody commerical I had written years before, based on those silly "Beggin' Strips" commercials -- the ones with the dog nose at the bottom of the TV screen screaming "IT'S BACON!" Anyway, in the spoof commercial, William Shatner provided the voice of the dog, and the omnipresent narrator was voiced by Leonard Nimoy...well, it was funny at the time, at least. Anyway, one day that old commercial popped into my head, and I went about making a comic based on it, with fat old William Shatner over-emoting like crazy. The "tweaking" via Photoshop was placing some of the word balloons and text boxes on the original drawing after the fact (you can tell what was placed on after the fact, as there's no cross-hatching crossing over on the ones not originally in the picture).

I'm surprised that the drawing even looks a little bit like Shatner. I didn't think I could do it that well drawing from memory.